Yooka-Laylee and The Impossible Lair

Yooka and Laylee are back for an all-new 2.5D platforming adventure!

Yooka-Laylee and the Impossible Lair

Yooka and Laylee are back for an all-new adventure: Yooka-Laylee and the Impossible Lair!

Capital B is up to no good! With a “Hivemind” device in his greedy hands, he’s causing a great deal of trouble for the Royal Stingdom and its Bee population. Its ruler, Queen Phoebee, has summoned Yooka and Laylee for aid – they must rescue the captured Royal Beettalion Guards and put an end to Capital B’s meddling.

All that stands between the lizard and bat and their bumbling adversary is the Impossible Lair. How hard can it bee?

"Donkey Kong Country fans rejoice: this is the spiritual successor you’ve been waiting for”

Nintendo Life
“One of the best side-scrolling platformers of the century.”

God is a Geek
“One of the best platformers we’ve seen in years.”

Yooka-Laylee and the Impossible Lair features over 40 bee-autiful action-packed 2D levels. Master Yooka and Laylee’s medley of moves as they work in tandem to roll, jump, twirl and slam their way through obstacles and enemies alike!

The Royal Stingdom is packed with platforming surprises. Swing from vines in a lush spider-filled forest, boldly blast yourself out of flower canons, throw explosives at crabs, ride windy whirlwinds and more!

Collect ‘em all and locate 5 hidden coins in each level to unlock more sections of the 3D Overworld. Ghost Quills await you with a bonanza of Quills up for grabs. If you complete their challenges, you’ll be a Quillionaire in no time!

Between 2D levels, there’s a sprawling 3D Overworld to explore! Find over 60 Tonics nestled within every nook and cranny as you journey through an exciting assortment of environments. Take on Pagie challenges to alter the terrain, meet weird and wonderful characters, and uncover secrets to change the nature of 2D levels!

The State of things

Tonics and Quills aren’t the only bounties the Overworld has to offer! Solving puzzles and problems can unlock a second state for 2D levels. Drench a level to unlock an underwater version of it, grow lush foliage in a previously dry and dusty environment, turn an entire level upside down and more!

Each alternative state is a level of its own, with 5 T.W.I.T coins to collect and a Beettalion Guard to rescue at the end.

The Impossible Lair is always there

Imagine the ultimate 2D platforming challenge, then add in boss fights for good measure and you have the Impossible Lair!

Scorching sawblades, blazing beams, sneaky spiders (Webwalks if we’re going to get technical), and all sorts of other deadly obstacles await Yooka and Laylee.

Put your best foot forward and take the fight to the Impossible Lair whenever you like.

You can choose to go at it alone or enlist the help of the Beettalion Guard you have rescued. Can you do the impossible and thwart Capital B’s most dastardly scheme yet?

If you played Yooka-Laylee then you will remember Tonics, game-changing “potions” provided by the ever-lovable Vendi. In Yooka-Laylee and the Impossible Lair, we’ve revamped them! There are over 60 to collect and they have a variety of weird and wonderful effects on your 2D gameplay. Want a massive head? There’s a Tonic for that. Disco lighting, slow-motion, flowers when meanyions die, pixelated graphics, different skins for Yooka? Check!

Tonics can be combined too, meaning you can experiment and craft concoctions. We recommend giving “Yooman”, “No Tailee” and “Chameleon Colours” a go.

Grant Kirkhope and David Wise have come back for another round, treating Yooka-Laylee and the Impossible Lair to an assortment of marvellous melodies. They’re joined by in-house talent, Dan Murdoch and Matt Griffin, who both bring something new yet familiar to the table.

You can have a listen to the soundtrack on Bandcamp if your ears need convincing. 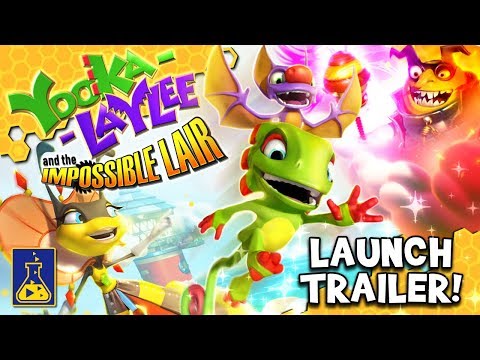 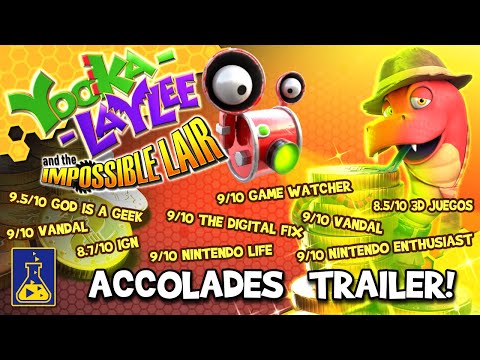 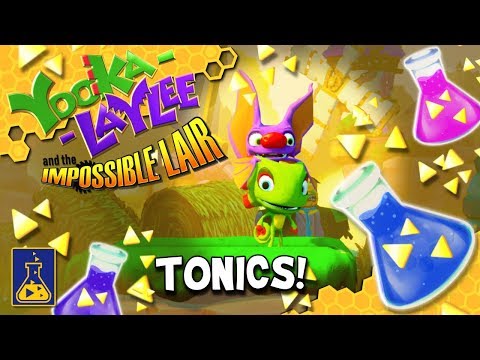 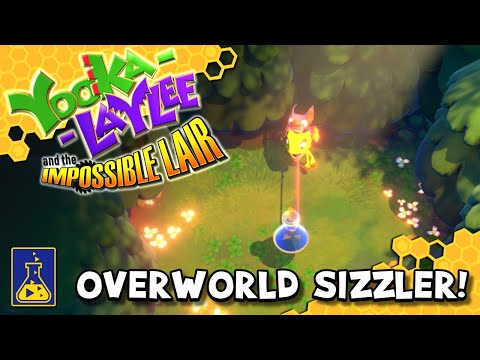 The Story So Far

Latest news about Yooka-Laylee and the Impossible Lair

Yooka-Laylee and the Impossible Lair: Anniversary!

Wahey! A year ago today we released Yooka-Laylee and the Impossible Lair! Can you bee-lieve it's been a whole year? If you can, we don't bee-lieve you.

Apparently, Yooka-Laylee and the Impossible Lair is approaching its first birthday! We couldn't believe it either.

If you own Yooka-Laylee and the Impossible Lair*, you may have noticed a free update politely knocking on your door today. You should let it in and offer it a cup of tea, as this update has made the Impossible Lair, not-so-impossible, that is, if you want it to be.

You can find out more about which cookies we are using or switch them off in settings.

This website uses cookies so that we can provide you with the best user experience possible. Cookie information is stored in your browser and performs functions such as recognising you when you return to our website and helping our team to understand which sections of the website you find most interesting and useful.

You can adjust all of your cookie settings by navigating the tabs on the left hand side.

Strictly Necessary Cookie should be enabled at all times so that we can save your preferences for cookie settings.

If you disable this cookie, we will not be able to save your preferences. This means that every time you visit this website you will need to enable or disable cookies again.

Please enable Strictly Necessary Cookies first so that we can save your preferences!